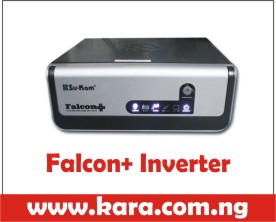 Sukam inverter has launched a new Pure Sine Wave Inverter called Falcon +. Falcon+ runs on is a 1050VA/12v. The new Falcon+ will capture up to 1050VA with supply from 12V battery which is just one inverter battery. Sukam Pure sine wave inverter falcon+ has an instant switch over, Falcon + is also equipped with automatic overload regulation that allows it to manage overload.

Sukam Pure Sinve Wave Inverter Falcon+ 1050VA/12V is an inverter with more than 1kva that will be using just only one battery. The implication of this is that with Falcon+ you will only buy one inverter and one battery which will give you high result at low cost

Sukam Pure Sine Wave Inverter Falcom+ is sold for 38,400 and you can get you own today at www.kara.com.ng

UPS or Inverter : Which is Better for Home and Office Use

Tips To Choosing The Best Solar Panel For Your Solar Installation.