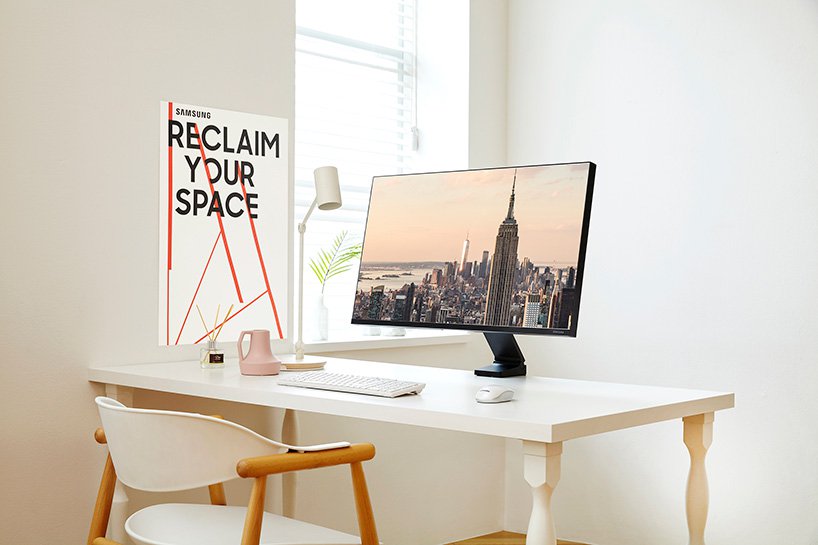 Samsung announced three new monitors ahead of CES 2019 on Thursday, January 3, one of which is a space-saving desk monitor called the Samsung Space Monitor, the screen is attached to a movable arm that also hides cables, allowing it to sit flush against a wall and free up desk space when not in use.
This monitor sports a sleek thin-bezel design. The Space Monitor will come in two versions: a 27-inch model with QHD resolution and a 32-inch model that’s 4K UHD. The company has not yet shared pricing or availability details.

The Space Monitor clamps to the surface of a desk, and its adjustable arm brings the action up close when you need it and pulls back when you don’t, freeing up valuable work space. When in an upright position, the arm disappears into the back of the monitor’s slim bezel. It can also be tilted or even pulled forward enough where the screen can be lowered to a desk’s surface. The Space Monitor also includes a discrete cable management system to help keep your work space tidy. Its discretion and easy ergonomics ensure the screen appears as a modern, minimal and flexible design that improves any workstation.

Power and HDMI cables are integrated into the arm, creating a minimal look. The convenience of having a screen that can be tucked away is attractive, though making it a touchscreen for when it’s pulled in close would have been a nice addition. Still, for those with small spaces, multifunctional rooms, or really anyone who loves having more desk real estate, this is a clever option.

The Samsung Space Monitor will be on display at Samsung’s booth (#15006) at the Las Vegas Convention Center during CES next week. Samsung hasn’t yet said how much the screens will sell for, nor do we have a launch date for them.

A press release said this new monitors would be available to pre-order from today exclusively, but that reference was omitted from the release on Samsung’s website.