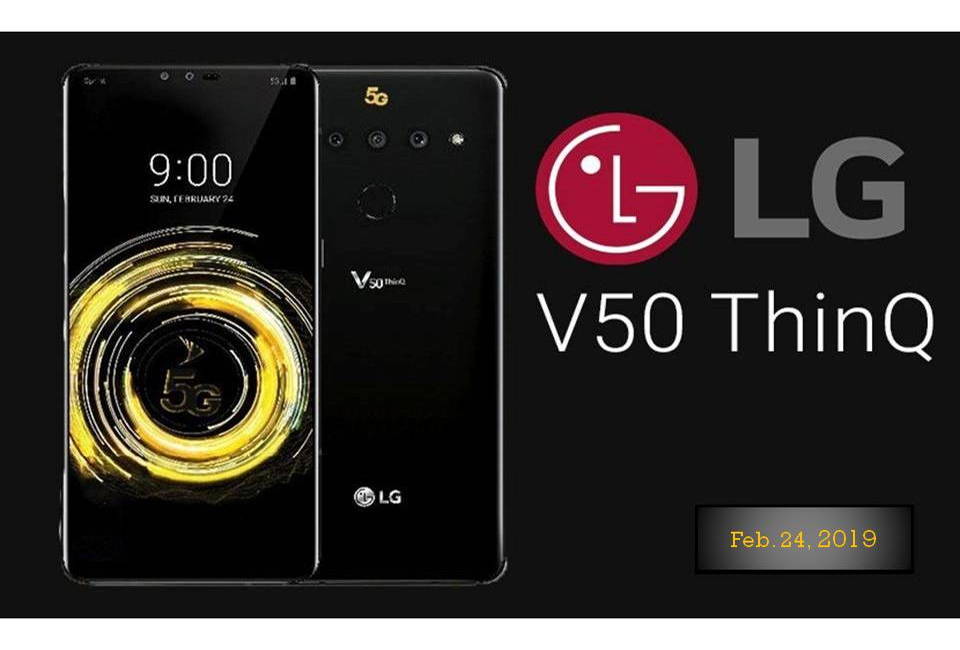 LG Electronics will unveil a new ThinQ V50 smartphone alongside other high-end devices, at Mobile World Congress. The LG’s V50 which could be the company’s first 5G phone is something to anticipate.

Bong-seok head of LG mobile and TV business, elaborated that the LG V50 ThinQ will be launched “betweenMarch and April” with support for 5G connectivity. However, since MWC 2019 will be the hotbed for 5G innovation, the company does not want to wait until the later this year to launch the LG V50 ThinQ and be left behind the competitors.

Although, the main trending and highly expected upgrade in the tech device now is the innovation of the foldable devices, LG president stated that foldable phones are “too early for LG” to be released.

Obviously, LG has decided to sail the ship towards the 5G innovation direction. Confirming this is a previous report from Korean media, Evan Blass just published a press render allegedly showing the Sprint version of the LG V50 ThinQ.

According to the leak by sprint, the giant yellow logo on the back and the very over-the-top wallpaper of the device hinted the 5G capabilities. The Picture of this device also leads us to believe that LG V50 will clearly resembles its V40 ThinQ predecessor quite a bit leaving any major update the the internal hardware.

The only immediately noticeable change is to the three rear cameras, which no longer sit on a raised glass module. Instead, they appear to be flush with the back of the phone, which is an interesting design choice.

According to leaks, the V50 ThinQ will be powered by a Snapdragon 855 chipset with a vapor chamber to keep it cool and also opt for the additional X50 5G modem for better performance.

The device is said to feature a 6” QHD display and boost a 4,000mAh battery juice to feed on.
In a news release by LG, it suggested that the battery in particular would help address fears that 5G phones might have lower battery life, which is a pretty dang valid one considering how poor the first 4G LTE phones’ batteries were.

Though from, Blass’s image we couldn’t confirm how thin the LG V50 ThinQ might be or whether it’ll still have a 3.5mm headphone jack, but we can see a few notable features nonetheless. It is obvious that their is a Fingerprint sensor at the back of the device right below the cameras, though this might be disappointing for those who are hoping LG migrates to in-display fingerprint sensors.

The LG V50 from Blass leak also exposed how impressive LG may have managed to cram the LG V40’s three rear cameras with wide angle, normal, and telephoto zoom into a package that lays flat instead of bulging out the back of the phone.

The major specs have not been confirmed yet, however, i believe we’ll certainly find out more at LG’s event at Mobile World Congress on February 24 which has been scheduled to unveil this phone and other premium devices with the likes of Samsung Galaxy S10, which means that we can expect the V50 ThinQ to be available some time in March, just in time to go up against the Samsung Galaxy S10 X 5G variant.