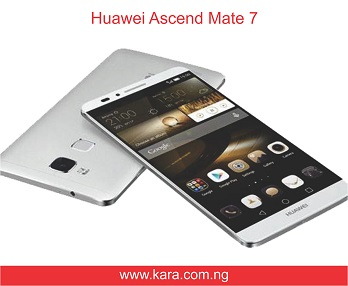 When Apple launched it 5.5-inch iphone 6 plus, it’s clear that big phones are here to stay. This is not news to Huawei, which already has a range of palm-stretching mobiles to tempt you with.

The latest addition of Huawei is called the Huawei ascend Mate 7. It’s not the seventh generation smartphone, nor does it have a 7inch display, so I’m confused as to the name Ascend Mate 7. Actually, Ascend mate 7 has a 6-inch display with a full HD resolution, an octa core processor, 4G LTE, a fingerprint scanner and a 13-megapixel camera. Whao! What a nice feature.

This much awaited Android Kitkat 4.4 powered Smartphone is made from aluminum alloy which makes it lightly yet sturdy. Huawei ascend mate 7 appears to be 3.5mm wider than Samsung galaxy note 4 yet slightly slimmer.

Huawei ascend mate 7 posses an impressive 8-core Huawei Kirin 925 processor. Four of which are large A15 1.8 Gigahertz chipsets for heavy duty processing while the other four small A7 1.3 GHz chipsets are for less intensive actions. The company claims that using the smaller chipsets can save 50 percent power. The Smartphone comes with 2GB RAM and runs on Android v4.4 KitKat OS with EMUI 3.0 on the top

Huawei ascend mate 7 has a fixed rather than a removable battery. The company says that 4100 mill ampere hour battery is huge enough to perform 9 solid hours of internet surfing, 60 hours of music playback, 15 hours of running movies saved on the device and 8 hours of streamed videos.

Huawei ascend mate 7 offers the Category 6 4G for faster cellular connectivity plus a fingerprint sensor at the back which can read fingerprints no matter the angle, no matter if the finger is wet or dry. Family and even other users can have their prints registered as well. For privacy, the owner can set-up guest access so they can limit the apps that guest users can access.

Huawei also equipped the device with a 13-megapixel camera with 2.0 aperture lens plus a 5MP front facing camera which can shoot 22mmwide angle mode. The user can use the camera’s shutter by holding the phone in front while pressing the fingerprint sensor.

Where to buy Huawei mate 7

Although  Huawei Ascend Mate 7 is in Nigeria but precise pricing or regional availability isn’t yet known. With such an imposing lineup of specs, it’s unlikely to go for pocket change, although Huawei has promised that it will be very competitively priced. Keep your eyes on www.kara.com.ng  over the coming weeks for further pricing and availability of this giant phone.