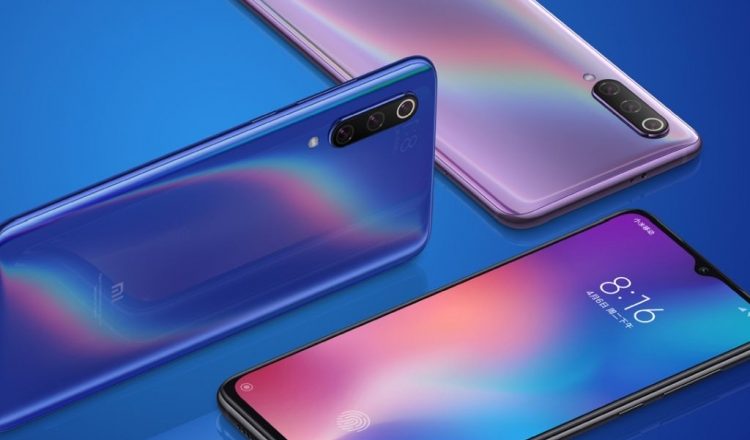 Xiaomi has announced its Mi 9 flagship at an event in Beijing, China, although the Mobile World Congress, the mobile industry’s annual shindig, is next week, Xiaomi can’t wait reveal its newest top-end phone. Following a few teases on social media over the past week, Xioami finnally unveiled this long awaited flaship device.

At first glance, the Mi 9 looks very similar to last year’s Mi 8, but with a smaller notch cutout. It is the first phone to be announced with the Qualcomm Snapdragon 855 processor, and triple cameras.

This is the first time Xiaomi has gone with a fully curved glass back on this smartphones, and it helped the Mi 9 settle really nicely into my hands. The Mi 9’s design ethic closely resembles Apple’s iPhone with a minimal bezel and notch-like front-facing camera. It is design with a metal frame sitting between two sheets of Gorilla Glass with an under-display fingerprint sensor to add to the premium look.

The whole back is made of a Gorilla Glass 5 piece bent towards the frame. There are ups and downs with these rear curves – they do make the Mi 9 look and feel thinner. It measures 155 x 75 x 7.6 mm, about the same as the Mi 8 despite the slightly larger screen.

The Xiaomi Mi 9 has a 6.39-inch AMOLED screen display which is the same screen found on the Mi Mix 3, but with the notch cut out for the camera with a 1080-pixel-wide resolution which makes up for a very decent density at 402ppi the display is a better upgrade.

It has one of the tallest screens around with an aspect ratio of 19.5:9 and the display is protected by the latest Gorilla Glass 6 by Corning which is the most shatter-resistant glass in the smartphone world.

The Mi 9 OLED screen has a very decent brightness for 430 nits which can still go as high as 620 nits in brightness.

The display covers 90.7% of the front surface of the phone, with a reduced chin (now just 4.6mm) and tall 19:9 aspect ratio. A fingerprint sensor is built-in, and operates 25% faster than on the Mi 8 Pro and Mi 8 Explorer.

The Xiaomi Mi 9 introduces the company’s first triple-camera setup with with lenses for wide, telephoto, and super wide. The main camera has a 48-megapixel Sony sensor , similar to the camera on Honor View 20, shooting 12-megapixel for the main camera serving as a a 12MP telephoto snapper for 2x optical zoom, as well as a 16MP ultra-wide-angle shooter.

This Sony IMX586 48MP sensor shooter comes with a very large 1.6µm pixels and real-time HDR. while for the front camera we have 20MP selfie shooter.

Xiaomi is the first global smartphone packing the latest Snapdragon 855 by Qualcomm. The Snapdragon 855 is built on a high-end 7nm manufacturing process and it’s promising plenty of power and efficiency gains over its predecessor.

This Mi 9 processor comes with the new X24 LTE modem, capable of theoretical download speeds up of to 2Gbps which mean it doesn’t support 5G.

This chipset is supported by a new Adreno 640 GPU which supports Vulkan 1.1, HDR Gaming, and Physically Based Rendering. And it should offer some nice performance bump over the 630 in the Snapdragon 845.

Mi 9 comes with a new dedicated vision processor that can now process depth mapping at 60 frames per second, which should greatly improve augmented reality applications. The new image processor also allows for 4K HDR capture at 60 fps, all while using 25% less power then its predecessor.

Xiaomi Mi 9 runs on the latest MIUI 10 launcher on top of Android 9 Pie which helps improves the system looks, gestures, and performance, while retaining the MIUI logic and any returning users would feel right at home. Xiaomi combines this chip with a minimum 6GB RAM and 64GB non-expandable storage, though the Mi 8 is also available with 8GB of RAM and 128GB or 256GB storage.

The Mi 9 also supports Always-on display and you can schedule it or leave it on/off all the time. As well as a Security app. It can scan your phone for malware, manage your blacklist, manage or restrict your data usage, configure battery behavior, and free up some RAM. It can also manage the permissions of your installed apps and allows you to define the battery behavior of selected apps and applies restrictions only to the apps you choose.

The Xiaomi Mi 9 is powered by a 3,300mAh battery which is 100mAh less than the cell inside the Mi 8, however, the Mi 9 supports both wired and wireless fast charging.

The Mi 9 ships with an 18W charger within its box and it can take a depleted battery to 45% in half an hour. This device supports 20W wireless and 27W wired charging called Charge Turbo.

Xiaomi Mi 9 Price in Nigeria is set to cost about 250,000 Naira depending on the deal. Buy on Kara Nigeria at the best price in Nigeria.

SHOP WITH US TODAY