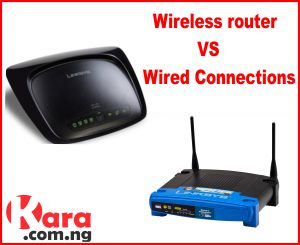 When you create a home network, you can choose between a wired connection and a wireless network. Most wired connections will use Ethernet cables to connect your computer to a router or directly to your modem; you may also be able to use your home’s phone-line system with the right hardware. To set up a wireless network, you’ll need a wireless router and compatible wireless devices that can access it. This comparison will help you understand the advantages of both wireless and wired networking devices, so you can set up the best home network for yourself.

Where to buy routers

1.Wired connection speeds: Wired connections can achieve extremely fast speeds, which work well if you have a fast broadband or fiber-optic Internet connection, making wired options superior to wireless when it comes to speed. These speeds are almost always theoretical maximum speeds, so you will probably see a lower speed in actual performance, depending on the actual conditions.

3.Installation: A wired connection is rather simple to set up. All you need is a connecting cable from your computer to your router or modem. You may need to change some settings to get your computer to recognize the connection. Wireless networks take a bit more work to set up, and you’ll need to place the router in a location where your computers will receive a clear signal. You’ll also need to set up security settings and a network passkey, which you’ll need for every single computer on the network. Depending on your wireless router and the operating system software running on each computer, you may have to install additional software or change the network settings to get the computers to recognize the connection.

4.Wired connections only require that your computer and network devices be compatible with a technology like Ethernet or HomePNA. Ethernet is the most widely used wired connection for desktops and laptop computers, requiring an actual Ethernet port. If you don’t have the appropriate port, you might be able to install an Ethernet adapter card that adds the port to your computer. Wireless networks, in comparison, need no connection ports. Instead, you’ll need wireless capability that uses a signal compatible with your wireless router’s signal. This means that many different Wi-Fi devices can use the network as long as they use the right signal. If your computer doesn’t have built-in wireless, you can add that capability by installing a wireless-network adapter through a USB port.

Security: Wireless networks do pose some security risks because they are usually being broadcast in public spaces. Wireless signal encryption offers some protection, but wireless is still not as secure as Ethernet and other wired connections that are not broadcast.