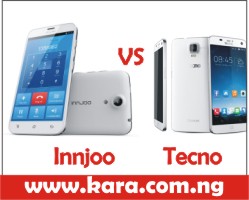 When Android smartphones landed in the Nigerian technology market, only few could afford them due to their exorbitant prices. Even crappy devices like the Samsung Galaxy Pocket sold for as much as N25,000. And you’ll have to break the bank to buy most of the other Android smartphones available at the time.

Then came Tecno to the rescue with their low-budget Android smartphones. The company stormed the Nigerian Android scene with the launch of the Tecno N3, which matched well with most other devices available at the time, but sold for much less. This helped them win the hearts of many Nigerians—and right now, Tecno Android phones are the commonest Android devices in Nigeria.

Some have described InnJoo as Tecno biggest rival. Some have even gone as far as saying InnJoo’s products are better than Tecno’s. But we (at Kara.com.ng) beg to disagree. To us, it’s too early to downplay Tecno in favour of InnJoo.

Here’s our recommendation: If you need to buy an Android smartphone right now, buy a Tecno. And here are our reasons for favouring Tecno over InnJoo.

1. Tecno has improved over time

It goes without saying that an experienced company is better than a new one. Tecno has been around for many years, and that alone speaks volume.

Right from the time Tecno launched its first Android device in Nigeria, the company has been offering support to users of their products through Carlcare, which has offices in Lagos and other cities in Nigeria.

With Carlcare to the rescue, there’s nothing to worry about as a Tecno smartphone user. No matter what fault your device comes up with, you’ll easily get it fixed at Carlcare at a very cheap price—or even free. In fact, if the problem with your device is too complex, Carlcare can swap it with a new device.

But if you have problems with your InnJoo smartphone, you have to either send it to the factory in Dubai or lock it up in your drawer until InnJoo opens a customer service centre in Nigeria.

Although Tecno didn’t start getting it right from day one.  They improved on their devices with time, as stated earlier. If the customer reviews and complaints we got about InnJoo are anything to go by, then we’d be right to conclude that InnJoo products aren’t there yet.

Some InnJoo users  are complaining of lagging, apps crashing during installation or running, and registration of false commands. These alone are enough as proof that InnJoo still has a long way to go.

So, if you’re considering buying an InnJoo phone or you’re one of those who regard InnJoo as Tecno’s killer, we just gave you three strong reasons to have a rethink.

For now, Tecno still rocks. No doubt, InnJoo is a promising company that will sure get there with time, but Tecno trumps them for now.