Apple has always wishes to surprise their customers. Apple now lunch a new model of their Ipad called Apple Ipad Air. Apple Ipad air is thinner in size but larger in content. Apple simple goes off their tradition to give you what you can take anywhere that will give you everything you want. We expect the Apple Ipad Air to be in Nigeria soon. 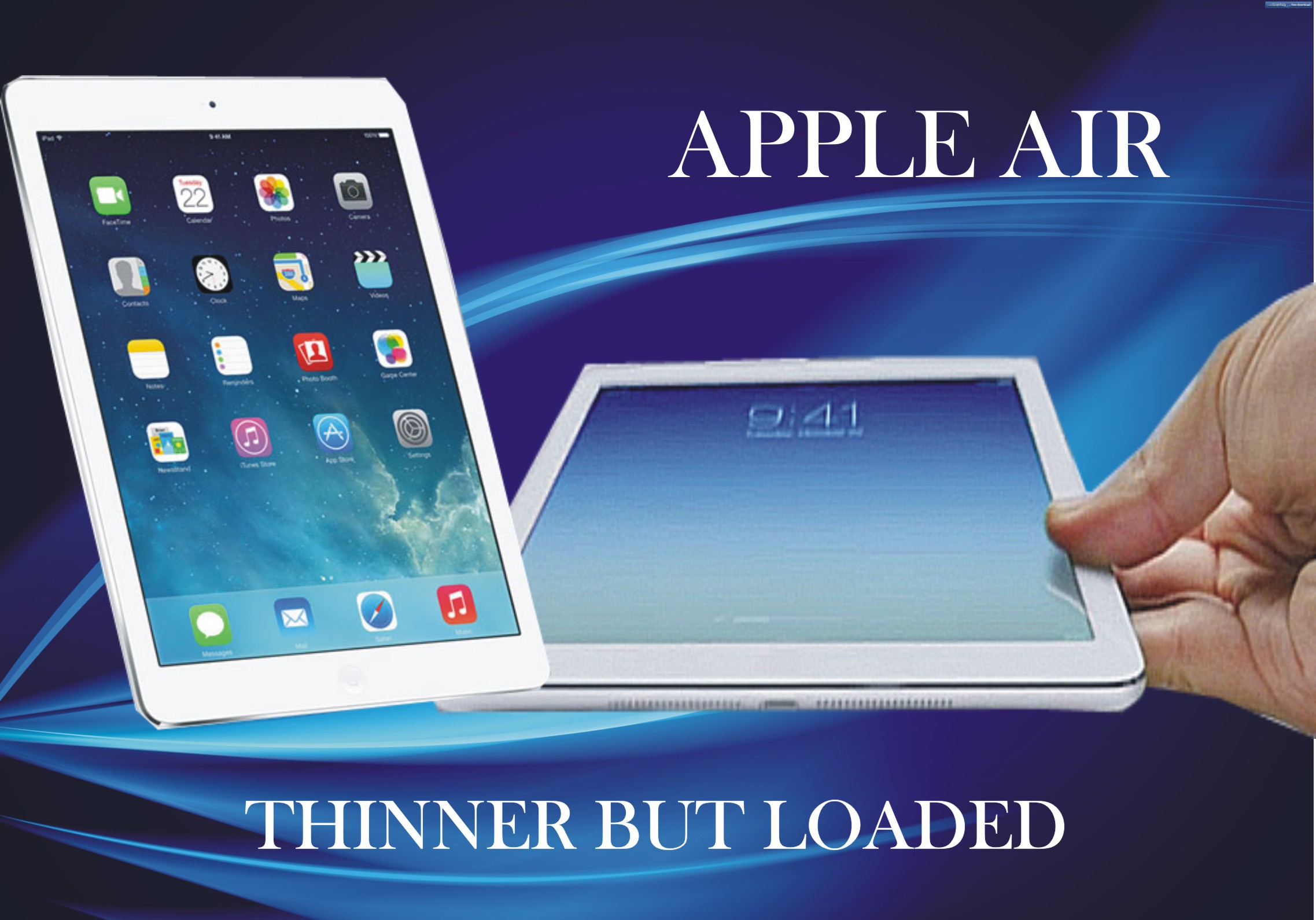 The Apple Ipad air is the latest Apple ipad that comes with the latest technology that you can ever imagine. Starting from the cover to the content, the Apple air is highly fascinating.  Apple Ipad air comes with the latest Os 7 which gives you the colourful and amazing function in the phone environment. It is also encrypted with M7 processor and A7 chip which does everything fast leaving your battery to last longer.

The Apple Ipad Air is equipped with the Icloud application, you will also get isight camera which gives you the clarity and standard you need in your picture. Apple air broke another record of not only being a thin phone but also weighs less than its predecessor.

Apple Ipad air is lighter and it weight is also lower than it predecessor. Apple Ipad air is 7.5mm thin without leaving any component of its part. It is on record that it has 17% glass, 70% touch sensor, 20% retina display, 25% battery and 23% unibody.

The weight of this amazing apple air is total 469g. So holding you Iphone air does not add up to your load, you might just forget that you are holding a phone and it gives you everything that you can imagine of getting on your ipad.

Apple Ipad air is also interesting with its added up battery life, considering its thinning appearance; it still gives you the same 10hours battery life. It more than you can think about.

Yes the specification of Apple Ipad air will drop your jaw. Coming in spray gray and silver, it is 9.4inches high, the width is 6.6inches while the depth is 0.29inches. Nothing can beat this. The content is also interesting as it has the fastest A7 chip with 64 bit architecture and M7 motion coprocessor making it fast like the speed of light. It has 32.4watt polymer battery which will last up to 10hours taking you far with highly quality display. The Apple Ipad air also comes with Os 7 which is still the world most advanced Os on mobile. It is also interesting to point out that Apple air has as its intelligence with Siri and it allows you to use voice to send messages and set reminders.

Apple Ipad air remains the latest Ipad in market and being the thinnest Ipad ever.

PRICES OF APPLE IPAD AIR IN NIGERIA AND GLOBALLY

It should be on record that Apple Ipad Air is loaded with 16gb, 32gb, 64gb, 128gb depending on the storage size you want. Everything is built for your size and taste.