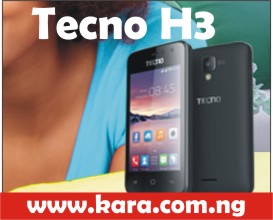 But for Tecno’s timely introduction of their budget Android devices, Android smartphones would have remained luxury devices that only few people in Nigeria can afford.

Since Tecno broke into Nigeria’s Android market two years back with Tecno N3, the company hasn’t looked back. Rather, it has continued to produce smartphones of higher quality and specs, while not forgetting those who can only afford low-end phones.

Now, Tecno has gone even lower in terms of price by its recent launch of Tecno H3, a low-end device that packs more specs than you can expect to get for its price.

If you need an Android device but don’t have much cash to part with, the Tecno H3 might be the best option for you. Read on to know more about what this new device by Tecno has to offer.

The Tecno H3 doesn’t really look different from its predecessors, since it comes in the traditional Tecno design. Almost the device’s entire front surface is taken up by the 3.5-inch display. The speaker, light sensor, and front camera lie just above the TECNO logo at the upper end, while the lower end sports the three capacitive control buttons.

The back surface is almost bare, but for the camera lens and flash that lie at the upper end and the speaker slit at the lower end.

Overall, the device is something you’ll love (if you’re not hard to impress), though it’s not spectacular or innovative.

With its credentials, the display is enough to give you clear images and video. Though you won’t get the same quality as a retina display, you won’t be disappointed by the device’s output.

The Tecno H3 is powered by a 1GHz dual core processor. But if there’s only one thing that makes this device special, it’s that it runs on the latest Android OS, 4.4 (KitKat). So, if you’ve always wanted to get a feel of this new OS upgrade, get your own Tecno H3.

The device packs 512MB of RAM with 4GB of internal memory, which you can expand to as much as 32GB with a microSD card. Though the RAM isn’t impressive, it’s fine for a low-end phone.

As with its predecessors, the Tecno H3 flaunts two cameras—a 5MP rear-facing camera with LED flash and a 0.3MP front-facing camera. Though they won’t give you images of the quality you’d get with an expensive Sony camcorder, you’ll still be happy with the images and videos you’ll get.

The battery is another plus for the Tecno H3. The device is powered by a 2,000mAH Li-Po battery, which can last up to two days with moderate usage. That’s a great improvement, considering that previous 3.5-inchers made by Tecno came with batteries of 1,500mAH capacities or less.

Specs at a glance

The Tecno H3 is presently available at the Kara.com.ng online store and sells for N10,000. We guarantee delivery within 24 hours within Lagos, and within 72 hours within other parts of Nigeria.

We deliver right to your doorstep, and you have the option of paying only when you receive your order (cash on delivery).