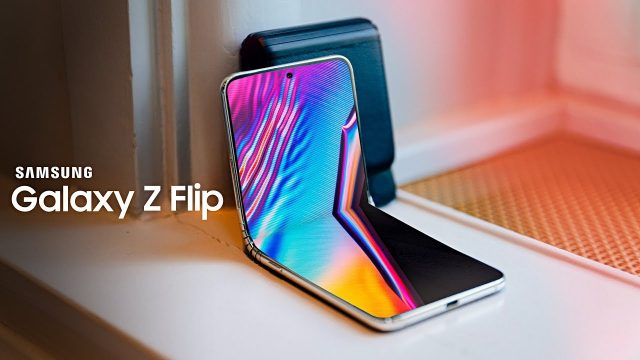 Unlike the Samsung Galaxy Fold, the company’s first foldable phone, the Galaxy Z Flip is smaller offering smartphone-sized display when opened and a portable hand phone when folded.

One of the main reason the galaxy Z flip is unique is the design. Compare to the company first foldable phone launched last year Samsung Galaxy Fold, the new foldable smartphone is sports slim, sleek design.

It looks like any regular smartphone when unfolded with Samsung’s ‘Infinity Flex’ punch-hole cutout at the top to accommodate a selfie camera. The Z Flip’s edge has curvier lines and more rounded corners.

Similarly, Samsung Galaxy Z flip comes with a 1.1-inch AMOLED ‘Cover Display’ on the outside to serve as a notification screen. The screen display incoming call, battery life, messages and other notifications.

You can launch app from the mini screen to open on the main screen when opened.

One of the few specs that make the Samsung Galaxy Z flip superior to the Motorola RAZR phone is the thin glass that covers the inner screen.

The Samsung Galaxy Z flip hinge is strong which allows you to half-opened the phone for usage. Samsung “Flex Mode” allows for hands-free video chats and previously unreachable selfies. So, fold it, flip it, stand it. However you set it up, it reinvents the way you take photos on your phone.

Although, the display is not up to par with other Samsung Galaxy flagships in some aspects, but it’s still impressive.

This camera array is essentially the same as the one found on the Galaxy S10e last year,

Similarly. the Secondary camera which is an Ultra-wide shooter comes with f2.2 aperture and 1.12-micron pixels. Galaxy Z flip back camera also comes with a bright LED flash, hence you can capture every moment as you go.

On the front, inside the Samsung’s ‘Infinity Flex’ punch-hole sits a 10MP selfie camera with f/2.4 aperture.

On the inside, Samsung Galaxy Z flip is powered by a 2019’s Qualcomm Snapdragon 855+ 7nm processor which offer suitable amounts of power.

It also comes with 8GB of RAM and 256GB of internal storage, however, there’s no microSD slot. Samsung Galaxy Z flip run on the latest android version Android 10 with Samsung’s One UI 2.1 on top.

Samsung is emphasizing One UI’s split-screen abilities by placing a slide-over widget that makes it easier to open a second app.

Samsung Galaxy Z Flip comes with a massive 3,300 mAh battery and charges at a maximum of 15W. It a dual-battery system as the Galaxy Fold does.

This phone also supports Samsung Wireless Fast Charge, as well as Wireless PowerShare to charge a Samsung Galaxy Watch, Galaxy Buds, or any other Qi-compatible device.

The Samsung Galaxy Z Flip is equipped with a side-mounted fingerprint scanner for biometric security. You can also Unlock your phone with Face Recognition.

Buy Samsung Galaxy Z Flip on Kara online Store in Nigeria. Get the best price for Samsung phones and other Phones on our Store.