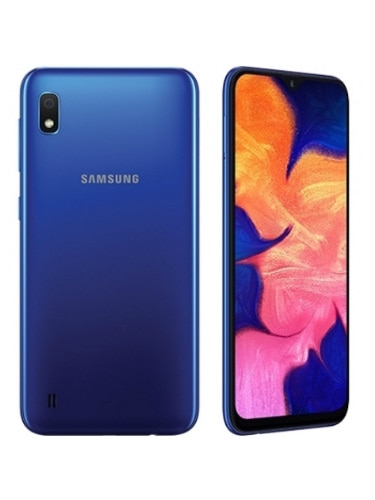 The new Samsung Galaxy A10 which is the youngest of the devices is Samsung’s new budget offering into the mobile market.

The Galaxy A10 will be the most affordable out of the three phones. Featuring a 6.2-inch HD+ display and a waterdrop notch design. It is powered by the 3400mAh battery juice and backed by 2GB RAM and 32GB onboard storage.

Just like the Samsung Galaxy A-series range is known for. The Galaxy A10 offers the best specification at a price that won’t break the bank.

The Samsung promised Infinity V display is also visible on the Galaxy A10. At the top of the device sit a hole-punch design forming an V shape to accommodates the selfie camera.

According to the company, the phone’s sleek, smooth, curves and plastic design is to offer improved users experience. Samsung galaxy A10 has curves in all the right places. The front glass panel is also made of Gorilla Glass. Galaxy A10 has tapered edges on all the right sides (four sides of the glass).

This device is said to be designed with practicality and everyday convenience in mind. Featuring a 6.2-inch display screen with a resolution of 720 pixels by 1520 pixel. The Galaxy A10 also spots an impressive 81.6% screen-to-body ratio at the front.

Samsung Galaxy A10 is a 6.2″ device. It’s Featuring an IPS LCD capacitive touchscreen display which looks great with its lush colors and deep blacks. Although, the Super AMOLED will have been better. The A10 comes with a resolution of 720 by 1520 pixel resulting in a pixel density of 271 ppi.

With the wide screen size, it has elegantly curved edges with pixels that spill over the sides. This device sports display colour up to 16 million which gives the device a colorful and bright display.

The A10 notch design gives the phone an aspect ratio of 19.5:9. this ratio is pretty much in line to what is currently being offered in the smartphone market.

Samsung also enhances the Samsung Galaxy A10 with the  Always On Display (AOD) feature. This feature is very handy to get notifications, check time, date and battery percentage without unlocking your device time over time.

One of the main selling and trending specification of this device is the presence of the hole- punch feature. Hole punches are the latest trend when it comes to smartphone displays in our never-ending quest to eliminate bezels.

Samsung has a very good record when it comes to phone cameras, hence, more is expected of the Galaxy A10. The Samsung Galaxy A10 sports a 13MP rear camera with f/1.9 super-wide 123-degree camera. This is quite a setback compare to Samsung Galaxy S10 which features triple rear camera.

The camera is coupled with other important feature like optical stabilization (OIS), aperture of f/1.7, auto-focus and a LED flash. Users can now capture sharp, clear photos in low light conditions, without sacrificing image quality no matter what time of day.

On the front, we have also a single 5MP camera with f/2.0 aperture for a smooth and detailed selfie shot.

Samsung has also include pre-loaded shooting modes such as Ultra-Wide, Slow-Mo, and Hyperlapse. The software side is handled by Samsung’s One UI that is based on Android 9 Pie.

It sports Octa-core Cortex-A53 CPU cores running at up to 1.6 GHz and Mali-T830 MP1 GPU. The GPU helps produces an optimum performance with less power consumption and more which helps the device to work very fast.

Samsung Galaxy A10 runs on the Android 9.0 (Pie) the latest user friendly Android version in addition to the Os version.

The A10 also sports the Samsung Experience UI One, which is simpler, clearer and also uses softer colors. It is slightly smaller with squircle icons, the swipe-up app drawer,  well segmented settings menu, themes selection and customization options. Hence. it easier on the eyes and colourful in every right sense. The UI One features power user features like split-screen multitasking, KNOX security and Secure Folder are also present.

Samsung Galaxy A10 comes with 2GB RAM and 32GB internal storage space. Fortunately, Samsung still keeps to using the micro-SD card slot to expand the on-board space. The Micro SD capacity can be expanded up to 512GB.

This smartphone is powered by a non-removable 3,400 mAh Long Lasting battery. A powerful and efficient battery juice for excellent users experience. The Galaxy A10 also lacks the support fast charging.

Samsung Galaxy A10 price in Nigeria.

Full Specifications of Samsung galaxy A10