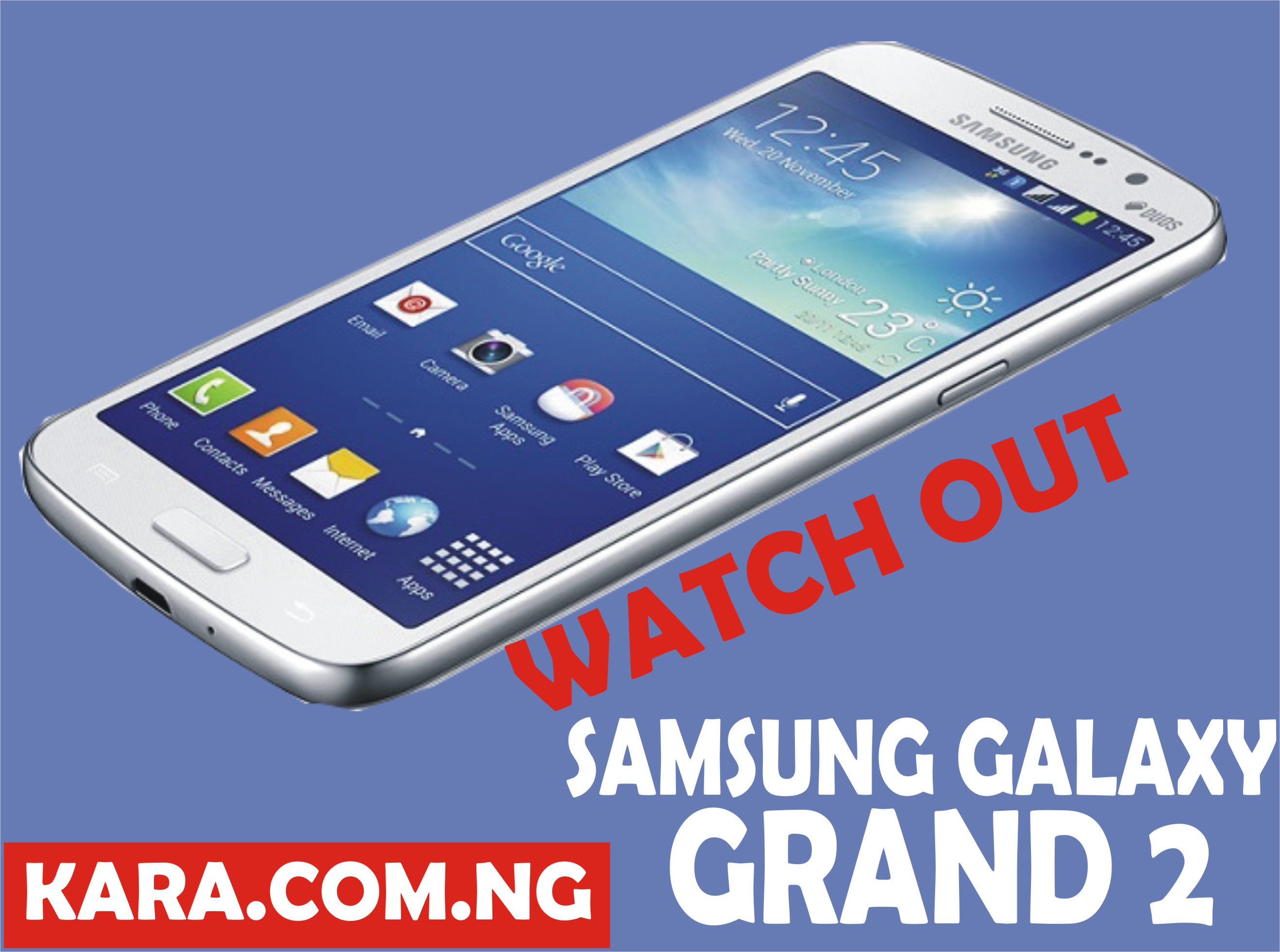 When the shops comes to your doorstep, no one feels like moving out of the house.  With Galaxy grand 2, everyone wants information on their fingertips and what is the better way than mobile technology? No matter what type of business you may be related to, mobile phone would be the present day solution to acquire and retain customers. That is the reason why Samsung has unveiled Samsung galaxy grand 2 a mid range smartphone. Samsung galaxy grand 2 is the successor to Samsung galaxy grand which features HD display, quad-core processor and it’s a dual sim device that will make internet surfing easier and also allow you to surf the web on the move, watch your favourite videos, read your favourite books, runs a wide range of applications and play HD games like never before.

Samsung has decided to pre load the samsung galaxy grand 2 with some of the popular apps seen on flagship smartphones Galaxy S4 and Galaxy Note 3, such as story  album which can organize pictures by Timeline, S translator, company’s own content service ; S travel which offers guides and travel details; Samsung Hub, company own content service that offers access to offers music, videos and games. The phone also comes with group play, it also Group play and Samsung link a feature first that first seen on galaxy s4 which allow users to play games or music and share documents at the same time create and print albums all from your samsung galaxy grand 2.

S Translator: A translation service that provides instantaneous translations at any time

S Travel: Provides guides and travel information for your next trip

Sound & Shot: Record up to nine seconds of audio with your photos

Group Play: To listen to music , share documents or play games together

Samsung Link: Connects your devices so you can access photos, music, videos and documents from multiple locations

The Samsung galaxy grand 2 will be available in Black, pink and white colour

The benefits of having Samsung galaxy grand 2

The benefits of Samsung galaxy grand 2  include the following: they can be used as location finders in emergencies because it possess GPS/AGPS. they are a portable entertainment mode compared to laptop, they provide cheap access to the internet while on the move and they are an independent mode of communication for youngsters.

Samsung galaxy grand 2 runs on the Android 4.3 (Jelly Bean) out of the box. which will run smoothly on the one of the fastest processor; 1.2GHz quad core processor.

Samsung galaxy grand 2 packs a 2600mAh battery that can deliver up to 17 hours of talktime.

Samsung galaxy grand 2  can be used as a mp3 player, instead of carrying around your mobile and your iPod or whatever type of music thing you have; you can have easy access if you need to call someone right away, you are able to have calendars and email and the Internet on the phone, helps in connecting people through 3G(HSPA+), net surfing and it possess Stereo FM radio with RDSVoice Memo/Dial/Commandos,Google play, Google Search, Maps,  Gmail, YouTube, Calendar, Google talk,  Picasa;Voice Memo/Dial/Commands, lastly you can use your Samsung galaxy grand 2 any time anywhere.

A mobile phone s an electronic device used for mobile telecommunications over a cellular network of specialized base stations known as cell sites. The advantages of a mobile phone is that it is eases communication with others very easy by allowing instant access to anybody near a telephone, no long distance charges, has applications like games and calendard to help organize schedules, internet access among many other merits

The ability to download ‘apps’ to Samsung galaxy grand 2 can also make it not only personalized, but useful for people in most situations. From word processing software to a program that keeps an eye on the stock market, the range of potential uses can just not be argued with. For example, instead of waking up tired and grumpy, you can use an advanced alarm clock to measure your sleeping patterns which also wakes you up when you are sleeping at your  lightest. Not entirely necessary, but this could still be beneficial to anybody!

So if this level of technology can benefit from city workers to journalists, why can it not be taken advantage of at school? I have numerously thought to myself that if it happens that I travel out of Nigeria to a French or Spanish speaking countries and I’m to attend the language school to be able to learn those languages and it is accepted for students to use phone such as Samsung galaxy grand 2 which offers translator , My learning could be improved. Instead of taking out a dictionary, I Can simply use the translator, and instead of trawling through books for a piece of literature, i can find the books online and be directed to a specific word, and so on. The fact is that these phones are really just computers, yet I am unaware of a school that is reluctant to allow the use of these.

Schools themselves are modernizing greatly. Osun state in Nigeria , for instance, is in the process of becoming an academy. And I was impressed with the new technology being considered. Ideas such as giving each student a tablet (Opon Imo) and registering attendance online are being planned already. I think it is fantastic that schools are finally ‘getting with the times’ and are understanding the importance of ICT in education! Eventually I hope Android phones will be looked upon in a much more reasonable way and take a more important role in education.

Samsung has perfected its recipe for the phablet market – from the Galaxy Note to Galaxy Note 2, it’s been at the top of its game throughout. Now with the introduction of its latest phablet, the 5.2-inch Galaxy Grand 2 that combines three unlikely bedfellows –jaw dropping good looks, impressive hardware specs and will be coming with a budget price tag like its predecessor.  Here are the 10 features that makes Samsung Galaxy Grand 2 stand out in the crowd.

The ergonomically designed Galaxy Grand fits 2 comfortably in the palm of your hands, making it easy to hold and carry. Sporting dimensions of 143.5 x 76.9 x 9.6mm, this lightweight device oozes style and sleekness we have been grown used to with the Galaxy range of devices. Samsung Galaxy Grand 2  has a plastic built, which should serve well in carrying out daily functionalities.

The Galaxy Grand 2 is powered by an Android 4.3 (Jelly Bean) OS and 1.2 GHz dual-core processor ensuring  that the phablet has enough power to run smoothly, without any noticeable lags.

Samsung galaxy grand 2 is equipped with Project Butter and Google Now, the device promises users a new-age phablet experience where convenience and ease of use are key.

Samsung galaxy grand 2 boasts of Smart Dual SIM features that provides total communication flexibility, aiding you to swap two phone numbers within a single phone. Samsung galaxy grand 2  also offers flexibility of selecting different mobile billing plans for either SIM which allows managing of data plans better. In addition you can receive calls on one SIM number while taking a call from the other, ensuring you never miss a call.

Samsung galaxy grand 2 houses various intuitive features to allow users to engage with the device. These include:

S Voice – to control the phone using your voice

Face and voice unlock  – this feature enables the users to lock and unlock their device with face or voice recognition, providing better security for the device

Smart Alert  – another handy feature, this shows missed events such as missed calls and new messages just by picking up the phone

Popup Play  – last but not the least, for users who like to multitask. Now you can watch video in a pop-up window anywhere on the screen, while multitasking

Samsung Galaxy Grand 2 is a hybrid smartphone that comes packed with some rich connected applications that users will love. First up is the ChatOn, Samsung’s unique cross-platform communication service that enables you to freely share multimedia content, do group chatting, create personalized animated messages, socialize and more.

Then there is Games Hub and My Services that includes a bouquet of services like myMovies, myMusic, myMobileTV, myStation,myReader and myEducation. While  myMovies gives you access to thousands of  movies, trailers and film songs, myMusic allows you to download and listen to  numbers of song collection that totals more than 250,000. Similarly, my Reader allows Galaxy Grand 2 users to access newspapers, magazines, over 30,000 books and for the first time, even audio books.

For the movie buffs, use MyMobileTV to watch 100+ Live TV channels and myStation for Live Concerts and performances on their Samsung Galaxy Grand 2.

The Galaxy Grand 2 ships with dual camera support – a 8-megapixel primary camera and a secondary 2-megapixel camera. Equipped with flash, ultra quick camera start up, backside illumination sensor and zero shutter lag, the phablet arms you with the ability to shoot gorgeous pictures even in the dark, along with full HD video recording capabilities.

Putting rest to all your storage concerns, Samsung with Galaxy Grand brings 8 GB of internal storage, which can be expanded by up to 64 GB with a microSD card. In addition a 1.5 GB of RAM ensures that the device runs efficiently and quickly at all times too.

Samsung Galaxy Grand 2 is expected to have a price that will commensurate it design and specifications and will be affordable.

From the outside, the new Galaxy Grand 2 looks no different from Samsung galaxy grand its predecessor. That is indeed plural, as there have been two or three variants of the device. This time, Samsung Galaxy Grand 2 sports a slightly larger screen size at 5.25 inches, just a quarter of an inch higher than the original Galaxy Grand. Fortunately, the resolution is a rather acceptable 1280×720 pixels. Inside, the Galaxy Grand 2 runs on a 1.2 GHz quad-core CPU and has a strange RAM configuration of 1.5 GB. Internal storage is capped at 8 GB but the external microSD slot is capable of handling an additional 64 GB. It has an 8 megapixel rear camera with Auto Focus and a 1.9 megapixel camera in front. It has WiFi, Bluetooth 4.0, and GPS + Glonass connectivity, but no word on LTE network support. It does support dual SIM right out of the box.