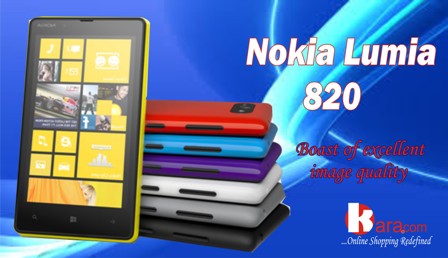 Availability and price of Nokia Lumia 820

Nokia Lumia 820 is available in most Nigeria stores and you can get one today at www.kara.com.ng  at an affordable price of N59,900

Nokia Lumia 820 features a range of back ‘Shells’ which will allow users to customize the look of their phone as well as adding functionality such as Wireless charging, if a shell with that capability is added. Nokia Lumia 820 feature gives additional benefit of allowing a scuffed or broken shell to be replaced with a new one to freshen up the device, something which is not possible on some competing smartphones such as the iPhone or unibody Lumia designs such as the 900 and 920. It additionally allows user access to the battery so that a battery which no longer holds a charge can be replaced with a new one, or, if on a long trip away from a charger, the user to swap a spare fully charged battery for an empty one, increasing the time the phone can be used for