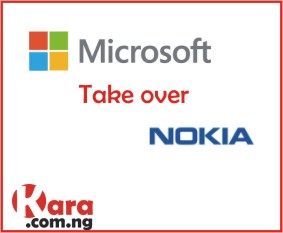 Microsoft is buying the Nokia brand, the Nokia brand will just be faced out and will be replaced by Microsoft Lumia. This rebranding effort will take a swift and overhauling effect soon as Nokia phone will now have the new brand name Microsoft. With this new development most of Nokia online properties will be directed to Microsoft and this is coming at a period where major brand in the phone industry and selling out their brand name.

This development does not mean that Nokia will be folding up but it will only shift ground from a phone maker to major app maker such as the mapping app which in recent time has seen to have an android version.

The major question to ask is that will Microsoft Lumia take over the brand name totally, will Microsoft continue to produce windows phone or will divert to his competitors line (android phone), Will Nokia expand it apps to other phone vendors or limit it to lumia, only time will tell.