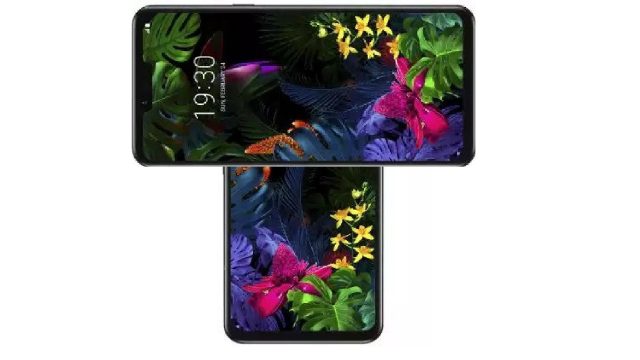 LG Wing is a rotating-screen phone with no folding panel, but, it indeed has a dual-screen phone. In its compact state, it looks like any other regular smartphone. But flick that top portion 90 degrees to the side, and the Wing will take on a “T” shape, with a horizontal 6.8-inch display hovering above an almost-square 3.9-inch one. It also comes with a pop-up selfie camera, which allows you to simultaneously record rear and front-facing footage.

The LG Wing 5G looks pretty much like any other phone out there at first glance: edge-to-edge display, rectangular design, side buttons, in-screen fingerprint display,. The phone also comes with a pair of volume buttons on the right side and a lock button below it. There are also SIM and microSD slots on the left side and a USB-C port on the bottom, with the phone’s single speaker to the right of it; on top are a microphone and the pop-up front-facing camera.

This LG Wing’s front is a good-looking relatively big 6.8” P-OLED, while the panel underneath is an almost-square 3.9” secondary G-OLED. The screen is just a 60Hz panel, however, but sharpness, colors, and viewing angles look good. It also offers gimbal-like stabilization

LG has developed some cool features to utilize the interesting design, like turning the secondary screen into a dedicated keyboard or a trackpad. There’s also the dual-screen feature that lets you two apps simultaneously, but not the same apps, and the UI supports only a limited number of apps.

According to LG, certain apps can be used across both screens or two apps can be used at once (one on each screen). LG is also offering a Multi App feature that echoes a similar feature seen on the Galaxy Fold and Surface Duo lines. This will allow you to create a shortcut to quickly launch a desired pair of apps. If you want to watch a local video while browsing the web, you could theoretically create a shortcut to open your video player and browser in one go.

LG Wing smartphone comes with a triple rear camera consisting of a 64-megapixel main shooter, a 12-megapixel wide camera, and 13 megapixels ultrawide camera which is supported by a gimbal mechanism thanks to LG’s new Hexa motion sensor system, which helps it ensure stable recording. It also allows digital approximation of following a subject and panning the screen.

The front-facing camera which is housed in a pop-out mechanism concealed within the top edge carries a 32MP shooter. It is LG first smartphone with the pop out camera. The 32MP shooter pops up from the top of the phone. It has a dual Recording mode which allows you to flip back and forth between selfie and rear cameras while recording or have both going at once and pick where the picture-in-picture inset video is.

The LG Wing is supported by Qualcomm’s Snapdragon 765G system-on-chip, the same processor found on LG Velvet, and paired with 8GB of RAM and 256GB of built-in storage. The Wing also features a microSD card slot for expandability by up to another 2TB.

Furthermore, LG Wing is pre-installed with Android’s latest OS with LG’s own Q OS over the top to take on Android customization. The UX is heavily-customized with the user’s convenience in mind. It offers the best user experience from all other LG Users interface.

This LG flagship phone packs a massive Li-Po 4000mAh battery which according to LG is specifically designed to maximize longevity on a charge.

Above all, LG Wing is dust and water-resistant but not good enough to go dunking it into a pool or walk proudly under the rain with it.