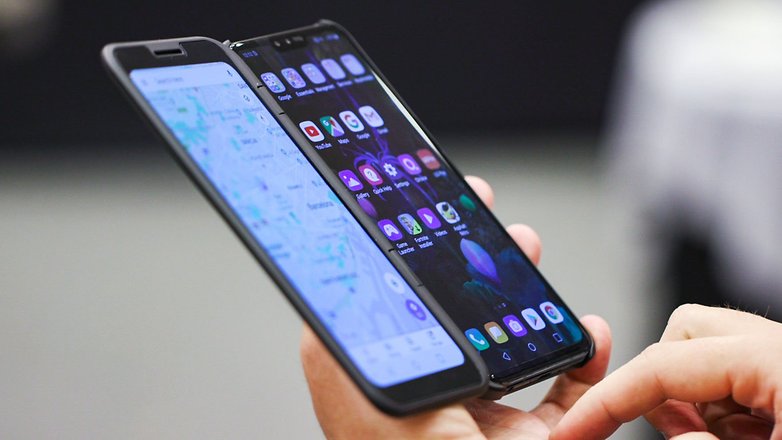 At the MWC 2019 LG mobile launched a new sibling into the V series along side the LG G8 ThinQ. The LG V50 ThinQ stands boldly amidst other latest mobile phones launched at the congress with trending specifications highly worthy of recognition.

The V-series have always brought us the coolest devices from LG and the V50 is no different. The phone features a dual screen and most of all the trending mobile network 5G modem onboard.

It packs a high-res OLED screen and Snapdragon 855 into a cool and durable body, there is a triple-camera at the back, a large battery, stereo speakers, among others.

Despite foldable phones been the order of the day, LG decided not to follow the trend but to be the trend. Hence, the launch of its Dual screen device design instead of a foldable smartphone.

On the surface, the LG V50 is mostly a bog-standard 2019 smartphone. The glass-sandwich body coupled with the glossy metal frame turned out to be quite the timeless design which is often seen on premium build devices.

The dual-glass smartphone accommodates a 6.4-inch 3120×1440 notched display, with iPhone X- like styled cutout. And a screen accessory which is a case with a second 6.2-inch OLED screen that connects to the LG V50 through the pogo pins on its back.

Open it like a book and you can use both screens simultaneously for multitasking. A floating button on the main V50 screen lets you swap content from one screen to the other.

Although the LG V50 lacks one of the trending features “punch-hole” which should have accommodated the selfie camera, however, that does not limit the uniqueness of the phone.

The bezels supporting the OLED display looks thin enough so as not to be so obvious. LG V50 has a triple camera on its back which are professionally aligned befitting of the device a premium device.

Unlike Samsung and other competitors, LG V50 lacks the in-display fingerprint scanner. The Fingerprint is a trend to recon with in the latest mobile features. Instead LG makes do with a fingerprint scanner on the rear and selfie camera-achieved face scanning on the front.

The Dual screen of the V50 is one of the highlight of the phone.

The entire front is the LG V50 home of beautiful 6.4″ Full HD AMOLED screen. It is supported by HDR10 sporting a resolution of 3,120 x 1,440 pixels resulting to 390 PPI per density with a notch cut out the top to house the front-facing cameras.

It has one of the tallest screens around with an aspect ratio of 19.5:9. The display is protected by the latest Gorilla Glass 6 by Corning which is the most shatter-resistant glass in the smartphone world.

The second screen which is an accessory is a case with a second 6.2-inch 2160 x 1080px OLED screen. This screen can either be used as second screen or just as a case. The second screen can be used for multitasking, however, while folded back so it’s touching the rear of the LG V50 its nothing but just a case cover.

On the camera department, LG multiplied the number of lenses in the LG V50.

A Led flash light sits to the right of the triple cameras, ruining the symmetry. Likewise, below is the fingerprint sensor, V50 ThinQ logo, and then LG’s branding. As a result, the back now looks a bit crowded.

The V in the V50 stands for video, and we expect it to have some smart video options. One special trick it has up its sleeve is the ability to take video portraits which automatically blur the background in videos, giving you a nice bokeh effect.

Like most flagship Android phones in 2019, the LG V50 is powered by Qualcomm’s Snapdragon 855 processor. It’s built on the 7nm architecture and should offer improvements in the GPU and CPU over the outgoing 845.

However, it’s the Qualcomm’s X50 modem that makes the LG V50 special. This modem enables the phone to connect to 5G networks when available, though it will revert back to 4G LTE when 5G is unavailable.

The presence of the 5G on this cell phone means faster speeds and lower latency. You’ll be able to download content incredibly fast, stream higher-quality audio and video without interruptions, and we’ll eventually see enhanced applications for augmented reality and virtual reality.

LG V50 also comes with 6GB of RAM and 128GB of internal storage, which is expandable with the use of a MicroSD card in case you need more.

LG V50 thinq 5g is juiced by a massive 4000mAh battery which can be can charged via a USB-C cord with Quick Charge 3.0 fast charging or with the use of a Qi wireless charger.

Thankfully, you never need to charge the second attached screen as it draws power from the V50 without the need for cord, so, Its wireless.

Like Samsung, LG is one of the few manufacturers to keep the headphone jack. There’s also a USB-C port at the bottom, next to the Boombox speaker from last year’s LG G7 ThinQ, as well as a dedicated Google Assistant key and IP68 water resistance.

LG hasn’t announced the price of the V50 ThinQ yet, however, we can expect that the V50 will not be cheap. Since the last year V40 cost cost upto ‎₦350,000 in Nigeria, therefore, the LG V50 price in Nigeria is definitely going to be more, with the added features.

Where To Buy LG V50 ThinQ In Nigeria.

Looking for where to buy LG V50 in Nigeria? It is very simple and stress-free. To avoid buying the refurbished product, the best option and the smartest move is to order from an online store.
The best online shopping website to visit with the best price of LG V50 ThinQ is Kara.com.ng. where you can order your preferred series at the best selling price in Nigeria and also enjoy fast delivery to any location in Nigeria.