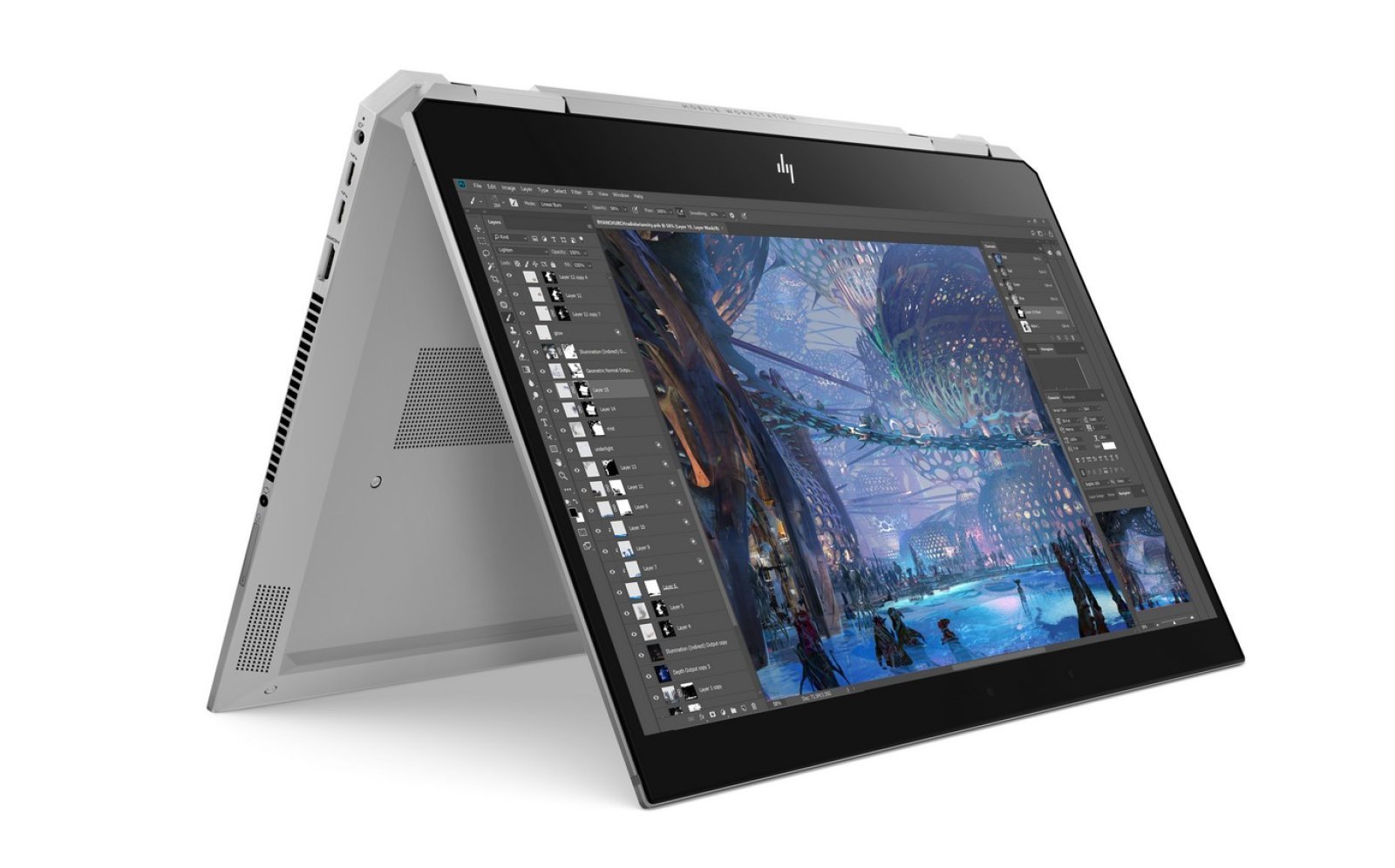 HP has made it a personal mission to take forward the era of the convertible computing devices.  Mastering and conquering the world of  2-in-1 workstation with its ZBook Studio x360 G5. This means, you basically buy a 2-in-1 device which can be a laptop, a tablet and a tent, depending on what you need it to be at any point of time.

The HP ZBook Studio x360 G5 is an indomitable beast with a Intel Xeon processor and a Quadro P1000 GPU. Between its dazzling 4K display, bouncy keyboard and long battery life, the ZBook Studio is quite amazing all around. Not to mention that its chassis is military-durable and pretty sexy at the same time.

It comes with a very fine metal construction, with a matte grey finish on it.  The bottom corners of the laptop are sliced off, creating a stylish and edgy aesthetic, while the top of the lid is accompanied by a solid line across the surface and the center of the laptop holds HP’s signature logo. The slimness and the straight lines with sliced edges give it a rather sharp personality,  with a fingerprint sensor, this ZBook Studio added extra effort in securing the data on the device more like it is seen in laptops.

This 2-1 ZBook studio X360 G5  weighs 2.26 kg and a screen size of 15.6-inch display which is a standard display size for laptops and offers the biggest variety of products.

This ZBook Studio x360 features a 10-bit (8+2 FRC) 15.6″ DreamColor IPS display with a UHD 4K 3840 x 2160 screen resolution, support for up to 1 billion colors, LED backlighting with RG phosphors, a 16:9 aspect ratio, 600 cd/m2 brightness, a 1200:1 typical contrast ratio, a refresh rate of 60 Hz, 282 ppi, viewing angles of 85/85/85/85°, and 100% Adobe RGB coverage. The display also features multi-touch functionality, allowing you to utilize the touch gestures and functions in Windows 10 Pro to further improve accessibility and productivity, and is protected by Corning Gorilla Glass 3. The dedicated NVIDIA Quadro P1000 graphics card has 4GB of discrete GDDR5 RAM and delivers a sharp, clear picture. You’ll be able to output video to an external display at resolutions up to 5120 x 2880 using the system’s HDMI 2.0 and dual Thunderbolt 3 ports, the latter of which supports DisplayPort 1.3.

It is is powered by a 2.2 GHz Intel Core i7-8750H Six-Core processor, which allows you to run multiple applications simultaneously. If you need more power, the system can be overclocked to 4.1 GHz using Intel Turbo Boost 2.0 technology. The 16GB of 2666 MHz DDR4 RAM helps to ensure smooth multitasking and also allows the computer to quickly access frequently used files and programs. For storage of files, this ZBook Studio x360 is equipped with a 512GB NVMe PCIe M.2 SSD.

For connectivity and additional storage the  X360 G5  offers two 40 Gb/s Thunderbolt 3 ports that also support 10 Gb/s USB 3.1 Gen 2 Type-C, plus two USB 3.1 Gen 1 Type-A ports, one of which doubles as a charging port. 802.11ac dual-band Wi-Fi is built-in for wireless networking and Bluetooth 5.0 technology will allow you to connect additional compatible peripherals. Content from memory cards may be accessed via a built-in SD/SDHC/SDXC card reader that supports UHS-II media, and other integrated features include a user-facing 720p webcam, dual-array microphones, and dual stereo speakers.

The 2-1 Studio book x360 is rated to endure 14 MIL-STD-810G3 extreme tests. That means the system should be able to withstand drops (up to 2.5 feet), vibrations, freezing, high altitudes, high and low temperatures, dust, sand, temperature and functional shocks, humidity and an explosive atmosphere. Installed on the device is Windows 10 Pro (64-bit) operating system.