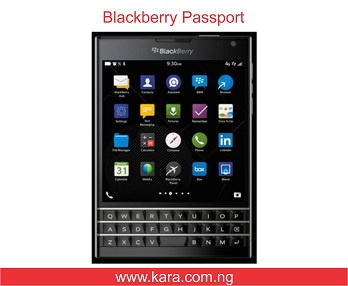 Where to buy blackberry passport phone

You can buy your Blackberry passport phone for N135, 000 @ www.kara.com.ng

Performance has never been an issue with Blackberry 10 phones. Even on their usual dual-core processors, they have always ran smoothly. But,  BlackBerry Passport is going quad-core with a Qualcomm Snapdragon 801 clocking at 2.2GHz, which combined with the 3GB RAM should make things run faster.

BlackBerry Passport comes with the new BlackBerry 10.3, which offers a few refinements. One of the big one is that Amazon Store now comes preloaded, so you can easily download Android apps on your Passport. The user interface now looks different with icons and buttons modernized.

Blackberry Passport features a 4.5-inch IPS touch display with 1440 x 1440 pixels resolution. The display is brilliant and great for reading and editing documents. Browsing the web and watching videos is also great because color reproduction have been reported to be awesome.

Memory card support: up to 128GB

Standby time: up to 444hours

Talktime: up to 23 hours