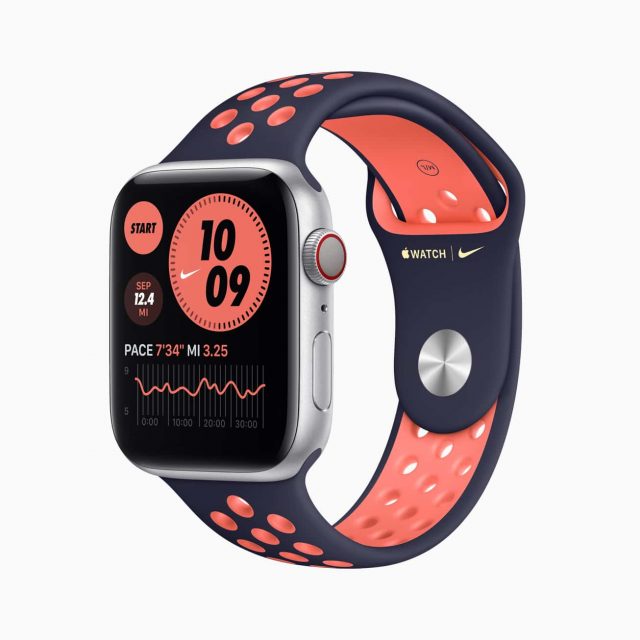 Today, Apple announced the launch of its new Apple Watch Series 6 sporting several new features including blood oxygen monitoring, a faster S6 System in Package (SiP) and next-generation always-on altimeter, along with its most colorful lineup yet, featuring a beautiful palette of new case finishes and bands.

Furthrmore, Apple Watch Series 6 delivers many notable hardware improvements, including a faster S6 System in Package (SiP) and next-generation always-on altimeter, along with its most colorful lineup yet, featuring a beautiful palette of new case finishes and bands.

The Apple Watch Series 6 includes a new sixth-generation chip, with a dual-core processor based on Apple’s A13 chip, which is 20 percent faster than the previous generation model.

Apple Watch Series 6 comes with the same impressively small design. The new design sports a rectangular OLED display with rounded edges that curve away and towards the wrist. For the first time, Apple introduced a new blue color to join the regular silver, space gray, and gold aluminum case and three-new band styles. The Stainless steel models are available in graphite; a rich gray-black hue with a striking high-shine finish and an updated classic yellow gold color. Apple Watch Edition is also available in natural and space black titanium.

There is a stretchable band design that comes in two materials: soft silicone and braided yarn. The soft silicone of the Solo Loop comes with a special UV treatment process which creates a smooth, silky finish, while the precision-braiding machine interweaves the 16,000 polyester yarn filaments, made of 100 percent recycled material, with ultrathin silicone threads, giving unique stretchability and a distinct look to the Braided Solo Loop. There are nine available lengths for the Solo Loop styles.

Lastly, Apple introduced the first-of-its-kind Leather which wraps elegantly around the wrist, effortlessly attaching on the other side with flexible molded magnets.

Apple Watch Series 6 comes with the Always-On Retina display which is is up to 2.5 times brighter than Series 5, making it much easier to see a watch screen even in bright sunlight. When their wrist is down, the user can also access Notification Center and Control Center, tap on complications, and swipe to change faces without having to wake their watch screen.

The Apple Watch Series 6 key feature is a blood oxygen monitor that uses a series of sensors to measure light reflected off a wearer’s blood. This new feature that conveniently measures the oxygen saturation of the user’s blood, so they can better understand their overall fitness and wellness.

Oxygen saturation, or SpO2, represents the percentage of oxygen being carried by red blood cells from the lungs to the rest of the body, and indicates how well this oxygenated blood is being delivered throughout the body.

With Apple Watch Series 6, users can detect their blood oxygen right from their wrist, thanks to advanced algorithms that measure the color of the wearer’s blood. The new sensor for the Apple Watch can measure your blood oxygen level in 15 seconds. This sensor also features will also support research studies that explore asthma, heart failure, and flu/COVID studies. The Blood Oxygen sensor employs four clusters of green, red, and infrared LEDs, along with the four photodiodes on the back crystal of the Apple Watch, to measure light reflected back from blood to improve accuracy and compensate natural variations in the skin.

Furthermore, Apple Watch uses an advanced custom algorithm built into the Blood Oxygen app, which is designed to measure blood oxygen between 70 percent and 100 percent. Mostly, this measurement are taken either when the user is asleep or inactive. The data collected on the user’s wellness will be visible in the Health app.

The Apple Watch Series 6 also comes with the always-on altimeter features which provide real-time elevation all day long by using a new, more power-efficient barometric altimeter, along with GPS and nearby Wi-Fi networks. This feature allows for the detection of small elevation changes above ground level, up and down to the measurement of 1 foot, and can be shown as a new watch face complication or workout metric.

Apple’s made a new Watch Face to help take advantage of the larger screens, these includes a Tachymeter, MeMoji, Stripe faces to show pride, team colors, and more.

The Apple Watch Series 6 is powered by a new dual-core processor based on A13 Bionic on iPhone 11. This processor runs up to 20 percent faster than one on the predecessor. Additionally, Apple Watch Series 6 features the U1 chip and Ultra-Wideband antennas, which will enable short-range wireless location to support new experiences, such as next-generation digital car keys.

Apple Watch Series 6 runs on watchOS 7 which allow users to personalization their watch with either of the seven new watch face options, including Stripes, Chronograph Pro, GMT, and Artist, while curating, discovering, and sharing new watch face configurations with others.

The OS comes with family setup which allows kids and older family members to benefit from the connectivity, safety, and fitness features of Apple Watch. It comes with a new mode called Schooltime, which can help them stay focused and attentive while learning at home or in the classroom. Likewise, an optimized features for older adults, starting with a simplified onboarding and configuration process, along with a refreshed X-Large face that shows the time and a rich complication at a glance.