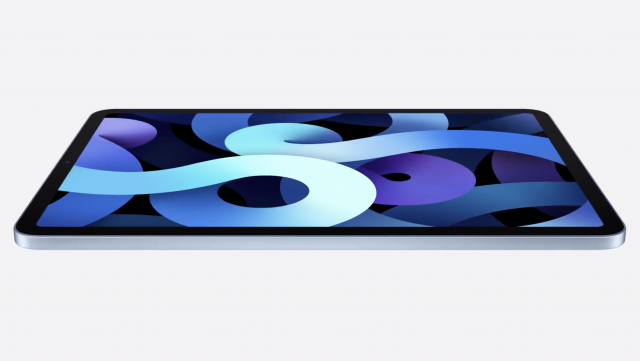 Apple iPad Air (2020) a beauty to behold. Apple has once again launched its most powerful iPad Air ever featuring a new all-screen design with a larger 10.9-inch display with much thinner bezels all around the display, a new 12MP rear camera, a next-generation Touch ID sensor, and more. This iPad carry’s the new A14 Bionic processor, improved camera and Touch ID, A14 processor, and audio upgrades.

Apple iPad Air features a similar design to the iPad Pro with an aluminum chassis, flat, rounded edges that wrap around the fully-laminated display. The all-screen design occupies the large 10.9-inch Liquid Retina display, in order to achieve, the iPad has no Home button. Apple has also moved the Touch ID fingerprint sensor to the power button at the top instead of the Face ID a first for an Apple device. This makes it the first iPad with biometrics built into the power button. Above all, the body of iPad is made out of front glass and aluminum frame. Hence the premium looks and feels. The device also has new speakers that use magnets with 100 percent recycled rare earth elements.

Apple’s True Tone display technology that monitors the ambient light in an environment and adjusts the colour temperature of the screen to make things easier on the eyes. The iPad also measures 81.3% screen-to-body ratio, leaving no room for bezels around the display.

Over on the camera side, Apple features the same 12-megapixel rear camera on the iPad Pro but upgrade it with improved video stabilization on the Air. A front-facing 7-megapixel FaceTime HD camera is included on the Air, with smart HDR and support for 1080p 60fps video capture.

iPad Air delivers a massive boost in performance with Apple’s most advanced chip, A14 Bionic. The chipset makes it easier for users to edit 4K videos, create gorgeous works of art, play immersive games, and more. It is the first 5nm chipset in an Apple mobile tablet with six-core CPU (two high, four low), and 11.8 billion transistors.

Apple says it’s the “most advanced chip” it has ever made, and it even includes specific machine learning accelerators that apps will be able to use and is promising a 40 percent performance improvement over the last iPad Air and improved graphics support, thanks to a new four-core GPU. This means the Apple iPad Air has a 40% CPU speed bump compared to the (A12-equipped) 2019 Air, and a 30% improvement in graphics.

Apple is also switching to USB-C on the iPad Air, much like the iPad Pro, and it’ll support 20W charging and 5Gbps data transfers. Wi-Fi 6 is also included, and optional LTE models will be available, with Apple promising 60 percent faster LTE connectivity.

The iPad Air 2020 runs iOS 14 which helps make navigating Apple’s ‘computer’ easier.  It brings new features and designs that take advantage of the unique capabilities of iPad, such as its large Multi-Touch display, and versatile accessories. iPadOS 14 further integrates Apple Pencil into the iPad experience for better note-taking capabilities, and new ways to work with handwritten notes.

This OS also brings Scribble to iPad, allowing Apple Pencil users to handwrite directly in any text field, making actions like replying to a quick iMessage or searching in Safari fast and easy all without ever needing to put Apple Pencil away.