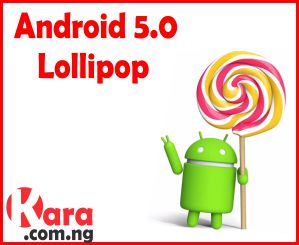 Android 5.0 “Lollipop“ is the latest version of the Android mobile operating system developed by Google. it became available through official over-the-air (OTA) , for select devices that run distributions of Android serviced by Google (such as Nexus and Google Playedition devices). One of the most prominent changes in the Lollipop release is a redesigned user interface built around a design language referred to as “material design”. Other changes include improvements to the notifications, which can be accessed from the lockscreen and displayed within applications as top-of-the-screen banners. Google also made internal changes to the platform, with the Android Runtime (ART) officially replacing Dalvik for improved application performance, and with changes intended to improve and optimize battery usage, known internally as Project Volta.

Where to buy lollipop android phones

Buy Android phones that came with 5.o lollilop on  www.kara.com.ng

Android 5.0 lollipop introduces a refreshed notification system. Individual notifications are now displayed on cards to adhere to the material design language, and batches of notifications can be grouped by the app that produced them. Notifications are now displayed on the lock screen as cards, and “heads up” notifications can also be displayed as large banners across the top of the screen, along with their respective action buttons.A do-not-disturb feature is also added for notifications. The recent apps menu was redesigned to use a three-dimensional stack of cards to represent open apps. Individual apps can also display multiple cards in the recent menu, rather than only one entry per app; for example, a web browser can show all of its open tabs as individual cards.

Lollipop also contains major new platform features for developers, with over 5,000 new APIs added for use by applications. For example, there is the possibility to save photos in a raw image format.Additionally, the Dalvik virtual machine was officially replaced by Android Runtime (ART), which is a new runtime environment that was introduced as a technology preview in KitKat. ART is a cross-platform runtime which supports the x86, ARM, and MIPS architectures in both 32-bit and 64-bit environments. Unlike Dalvik, which uses just-in-time compilation (JIT), ART compiles apps upon installation, which are then run exclusively from the compiled version from then on. This technique removes the processing overhead associated with the JIT process, improving system performance.

Lollipop also aims to improve battery consumption through a series of optimizations known as “Project Volta”. Among its changes are a new battery saver mode, job scheduling APIs which can restrict certain tasks to only occur over Wi-Fi, and batching of tasks to reduce the overall amount of time that internal radios are active. The new developer tool called “Battery Historian” can be used for tracking battery consumption by apps while in use.The Android Extension Pack APIs also provide graphics functions such as newshaders, aiming to provide PC-level graphics for 3D games on Android devices.

A number of system-level, enterprise-oriented features were also introduced under the banner “Android for Work”: Samsung contributed its Knox security framework for segregating personal and work-oriented data from each other on a device, along with accompanying APIs for managing the environment. Devices can also be configured so that users do not have to unlock their device with a PIN or pattern if it is within a trusted, physical location, or is in proximity to a user’s Android Wear device. Device encryption will be enabled by default

For the First Time Shoppers

Buy mobile phones, tablets, electronics, home appliances, Power system and more at prices you will love. kara online shopping site will gives you the opportunity to get that item you have always wanted at discounted prices. Shopping will be easy and convenient.  To order online; log on to www.kara.com.ng  click on “shopping cart, and carefully check each item for accuracy, and the shipping charges, Fill out the form with your name, email, mailing address  and mode of payment and the product will be delivered to your home or office. I just guide you to www.kara.com.ng where the best deals are found, and where the big online sales are on? Better prices than in your local store and other online shopping site! Let start enjoying these amazing. experience on www.kara.com.ng  !!!