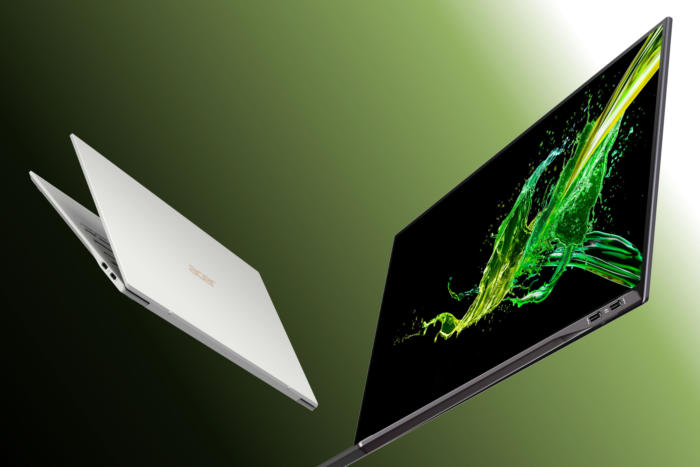 Acer has indeed shifted away from producing mediocre functional machines to stunning power performers. It is hard not to be swept away by the good looks of the Acer Swift 7. The fact that it won the Good Design Award 2016 comes as no surprise as it is alluring with its matte aluminum exterior and bronze-gold interior.

The “World’s Thinnest Laptop”, as it is been christened, the Acer Swift 7 was released at the at CES 2018. However, Acer’s Swift 7 model for 2019 (known as the SF714-52T) does something much more incredible. It storm the market as an ultra-thin, ultra-light laptop. Hence, reclaiming its crown as the thinnest laptop in the world.

Though it is referred to as the thinnest Laptop, that does not render it less functional. There is more than one improvement in the Acer Swift 7. Crafted in a truly unique Ultrabook with a clever design.

The Acer Swift 7 2019 now sports a beautiful magnesium-lithium and magnesium-aluminum alloy chassis body and a lot of goodies inwardly.

As with previous variants, the Swift 7 strikes you with its lack of weight and supreme thinness.

The first striking change from last year’s model is the new 92%(92 percent) screen-to-body ratio. This is possible due to the four-sided narrow display bezel which helps reduced bezels.

This new Acer Swift 7 2019 offers a dramatically smaller footprint than its predecessor, along with an even lighter weight at just 1.96 pounds. Measuring 9.95mm (0.39 inches), the new Swift 7 surpasses other seemingly sleek systems like the HP Spectre and LG Gram in both thinness and lightness.

This laptop isn’t just lighter than before, but also physically smaller than most other laptops with a 14-inch screen.

The Acer laptop features a magnesium-lithium and magnesium-aluminum alloy body construction which helps reduce the weight, thanks to the lightness of the material. Acer aspire Swift 7 surface sports what the company called a micro-arc oxidation finish treatment, which give the impression and feel of ceramic.

The biggest compromise on the Swift 7 is probably its webcam. Because there’s no room above or below the screen to put a camera, Acer took some inspiration from Huawei’s playbook and gave the Swift 7 a pop-up webcam that sits between its keyboard and screen.

Although, the 1920×1080 touchscreen panel might not have the highest resolution out there, but it looks quite bright and sharp, and the IPS technology means viewing angles were strong as well.

It enjoys extra protection is provided by a layer of Corning Gorilla Glass. This increases the Swift 7’s damage resistance, which can withstand drops up to 2 times better than devices with other glass.

The screen-to-body ratio of 92 percent will be of great help towards a better viewers experience. The wide screen ration has given no room for a webcam. However, Acer was clever enough to position the webcam between its keyboard and screen. So, the Acer Swift 7 now has a pop-up HDR webcam with just a press.

Acer says that the camera can rotate up to 65-degrees, which will be a great advantage to the laptop over its competitors like Huawei’s MateBook X Pro and many more.

The Acer Swift 7 keyboard is merely 0.39 inches (9.95mm) thin and weighs a miniscule 1.96 pounds (890g). The keys offer some forceful feedback as well, making for an excellent keyboard in spite of its size.

The touchpad has been addressed as well year over year, with this model at last bringing back the click function. That was well worth losing four tenths of an inch of thinness.

All thanks to the thin size of the laptop, the new Swift 7 is powered by Intel’s latest 8th Gen Core i7-8500Y Amber Lake processor. Instead of featuring a U-series Intel Core i7 chip found on a lot of premium laptops in it’s price range, Acer opted for an Intel i7-8500Y CPU.

The 8500Y is an interesting beast, as its default speed is 1.5GHz, but can boost to a whopping 4.2GHz. It allows for a completely fanless design. This chip is also seen on new MacBook Pro Air.

Acer Swift 7 comes in two different levels of storage and RAM. It comes with a choice of 256GB ssd or 512GB of PCIe SSD storage and either 8GB or 16GB of LPDDR3 RAM.

Although the Swift 7 (2018) shipped with an LTE slot, and even a trial plan that included a gigabyte of free data, Acer mentioned no LTE for the Swift 7 (2019). However, the new notebook includes Intel’s Wi-Fi 5 Wireless-AC card inside of it. There’s also Bluetooth 5.

Though the Acer swift 7 might be best at general computing however,it another case when it comes to gaming laptop. The two included USB-C Thunderbolt 3 ports could however make up for this with an external graphics card housing, or eGPU, which Thunderbolt 3 supports. The Type-C ports allow faster data transfers, device charging and display output with one reversible cable.

Despite the slim profile, the Acer Swift 7 does manage to offer a well-spaced backlit chiclet keyboard with a 1.1 mm key travel and a precision Gorilla Glass touchpad. Swift 7 also come with a power button that doubles as a Windows Hello fingerprint reader.

You also get 2×2 MU-MIMO Gigabit Wi-Fi along with a combo audio jack on the Acer swift 7. Sound quality is equally impressive as it is boosted with Dolby Audio Premium and Acer TrueHarmony.

Acer is also still promising around 10 hours of battery life off a charge which would put it in line with the vast majority of laptops using this processor.

According to Acer, the new Swift 7 will be available in North America in May starting at $1,699 (‎₦614500), with earlier April launches in Europe, the Middle East, Africa, and China. The Acer swift 7 is quite expensive, but there aren’t a ton of options out there combining extreme thin and light designs with a relatively spacious display and a powerful processor.

Where to buy Acer Swift 7 in Nigeria.

For convenience and best price buy Acer Swift 7 online in Nigeria. The price of the laptop will vary and that is dependent on the market and the deal. For the best price Visit Kara Online Store. Choose also any Laptop brand at affordable prices.